We touched down in Darwin after our short flight from Cairns and could instantly feel the heat hit you straight in the face. YAAAAS SUN!

We made our way from the airport to our hostel and spent the day wandering around the town and getting ourselves sorted for our tour the next day.

We had booked ourselves on a 3 day tour that explored the Kakadu and Litchfield National parks.

We got picked up super early on the morning of day one by our Way Outback tour guide, Simon, and quickly became friendly with another couple on our tour; Jason and Emma, both Aussies and both bloody hilarious!

One Japanese guy (who we later found out doesn’t speak English very well) didn’t listen to the warning given by Simon and was crouched down near the water edge trying to take photos – my heart was in my mouth watching him stupidly give himself up for a crocs dinner – luckily he moved back after multiple people telling him to stay away from the edge.

Our next stop was a cruise around Corroboree Billabong to spot crocs and bird life.

We were advised, again, to be careful of the salt water crocs. No pointing out over the boat and to keep your arms inside the boat at all times.

I’ll give you one guess who didn’t listen to these rules..

The first thing he did when we got seated on the boat was start tapping his hand on the edge of the boat in an attempt to coax the crocs – I mean, does this guy want to die?!!

Our boat driver then went on to tell us about how she had to get one of the crocodiles removed from the Billabong as it attempted to take a snap at her one day; jumped right out of the water with the snapping of its jaw only just missing her.

We saw many crocodiles basking in the sun, in the water and loads of birds too. We saw the Jabiru bird, sea eagles and so many more I can’t remember the names of!

After our cruise we had lunch and went to explore the Kakadu National Park, which is still home to 2 aboriginal tribes.

We hiked around Ubirr to take in the ancient ancestral art work carved on the rocks. They told stories of how the white men came, what animals they hunted and their ancestors past.

We climbed to the Nadab look out and were welcomed with a view that overlooks the land. The view reminded me of The Lion King; rust coloured sand, green trees and mustard yellow rocks.

After wandering Ubirr we made our way to our Campsite in Cooinda. We slept in tents, cooked dinner and had beers under the stars. 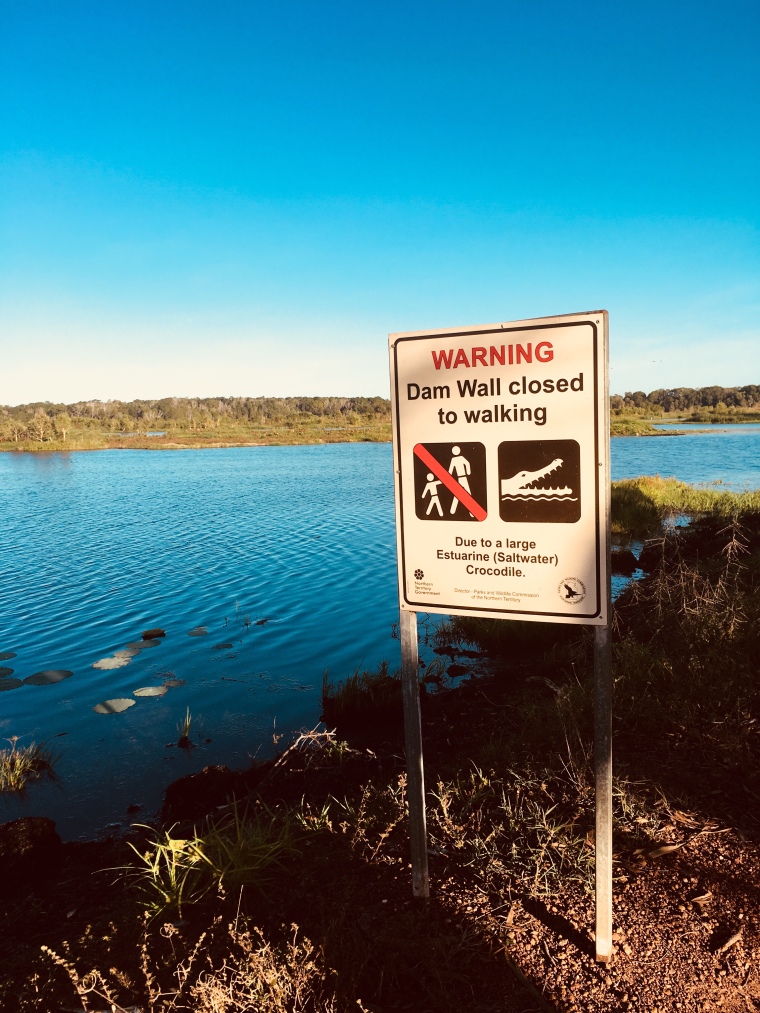 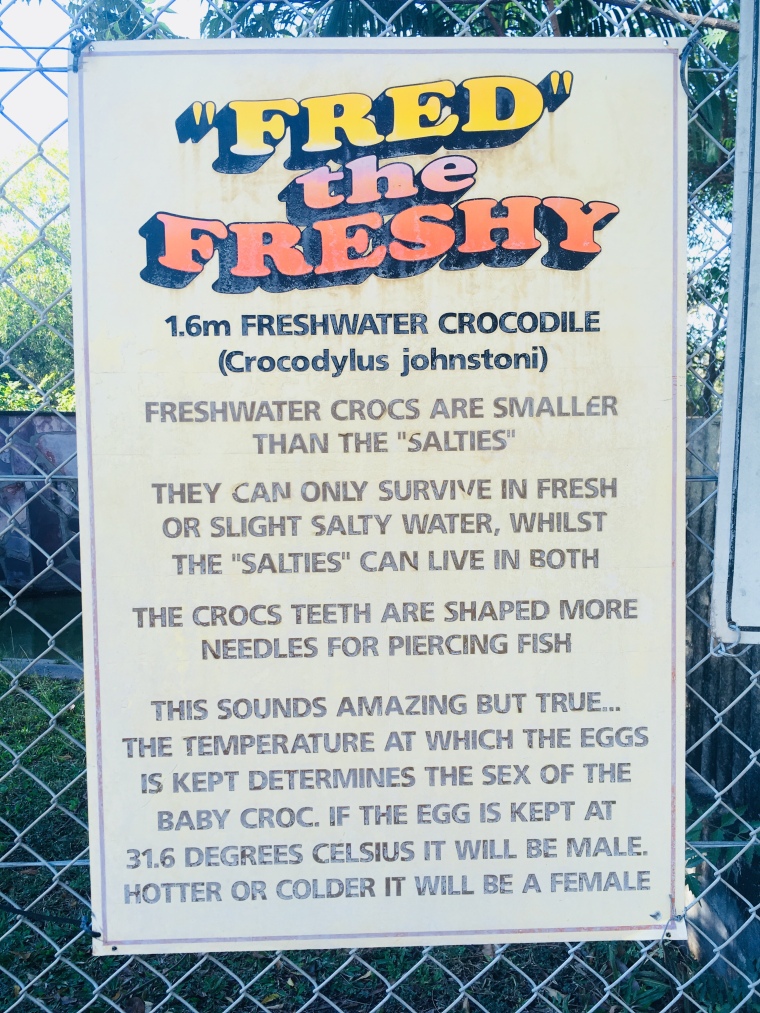 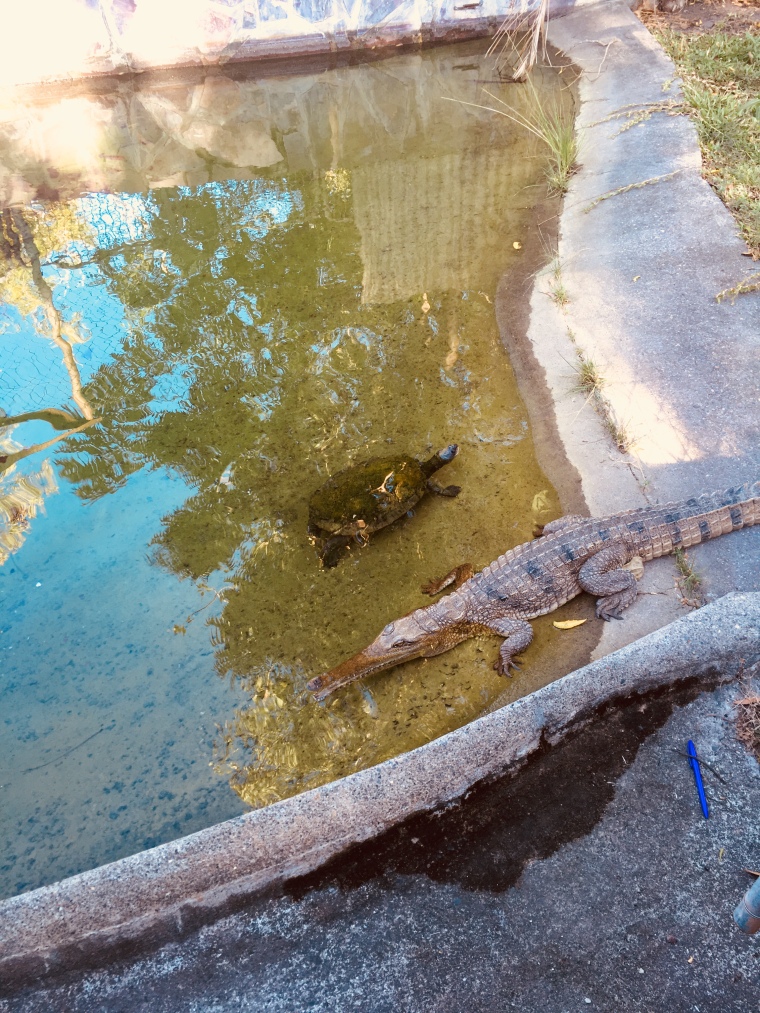 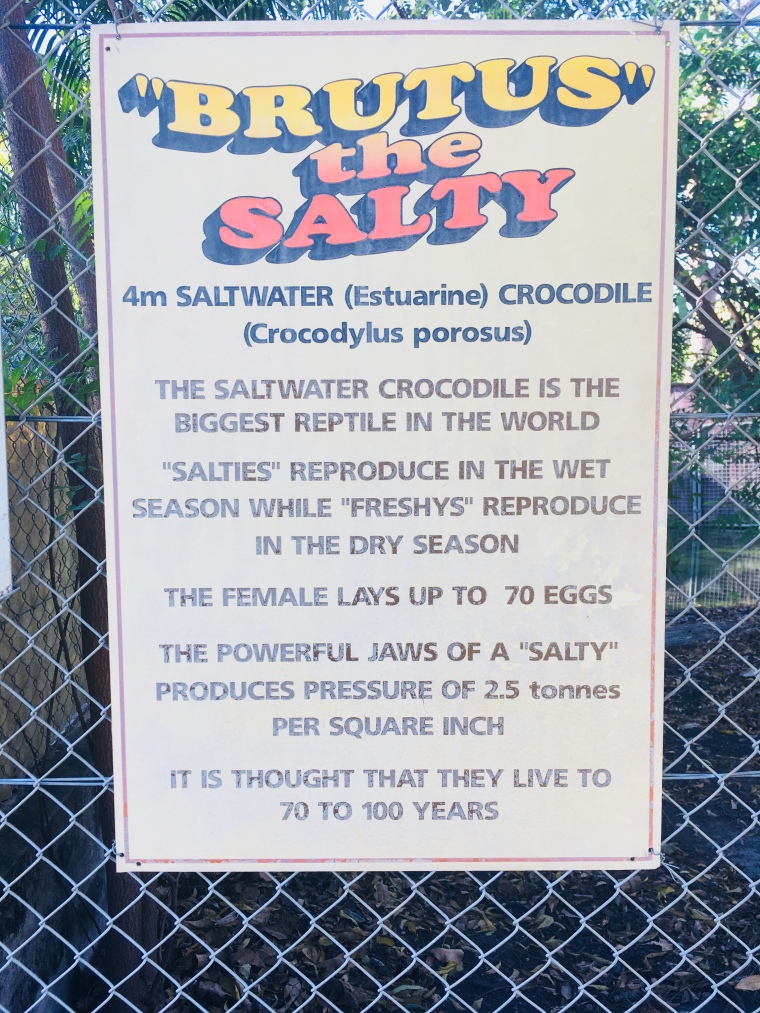 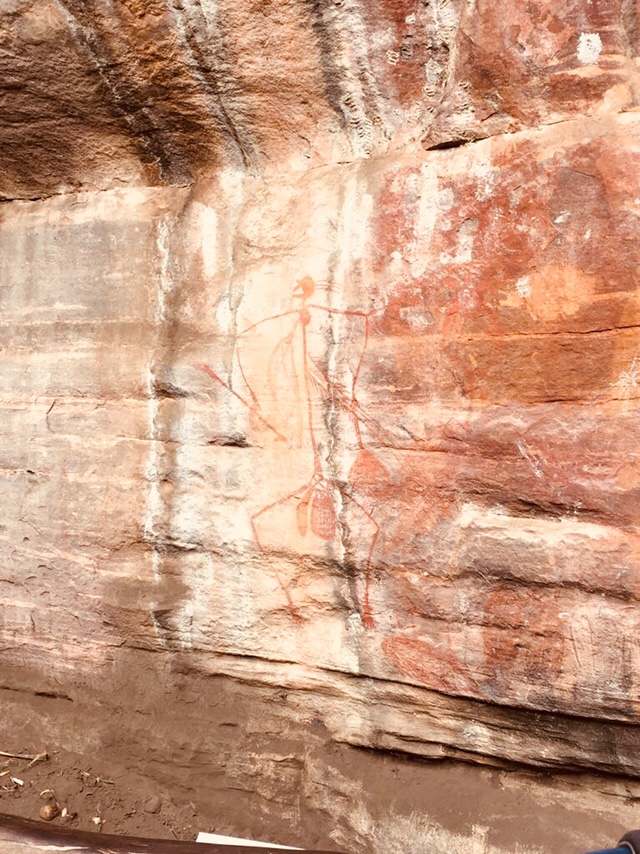 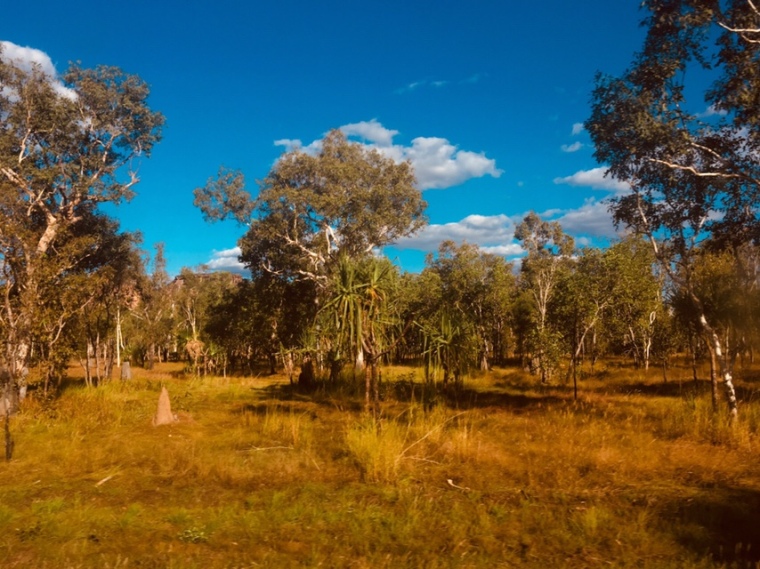 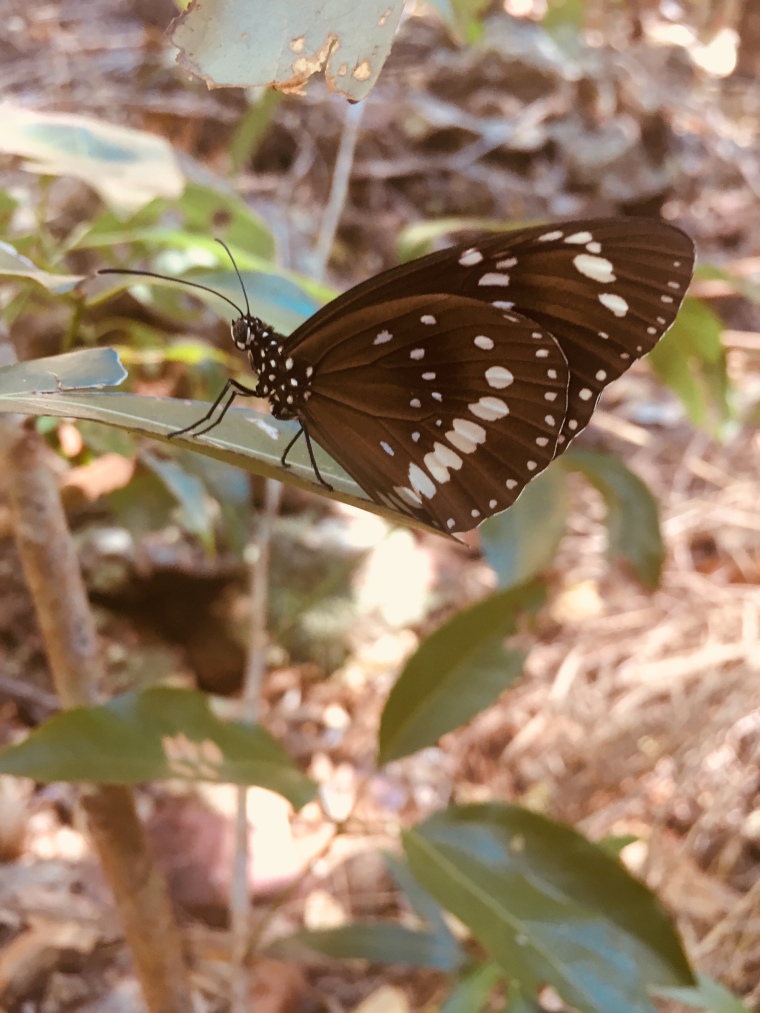 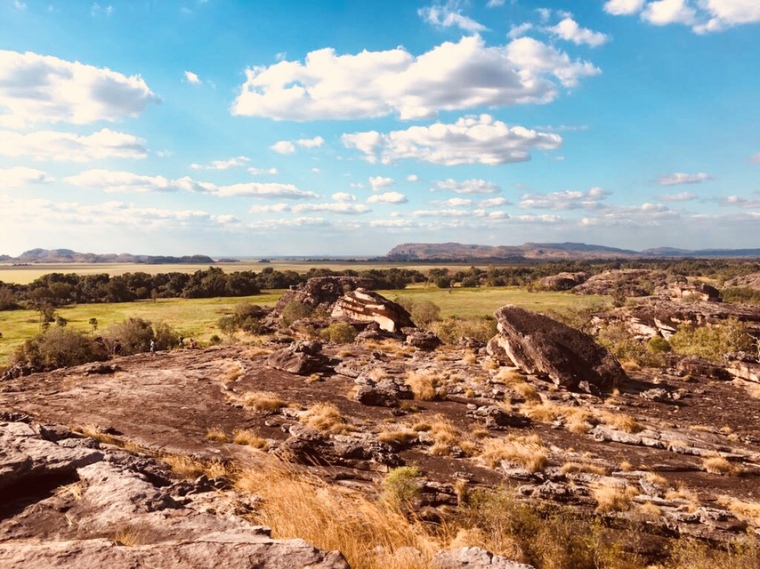 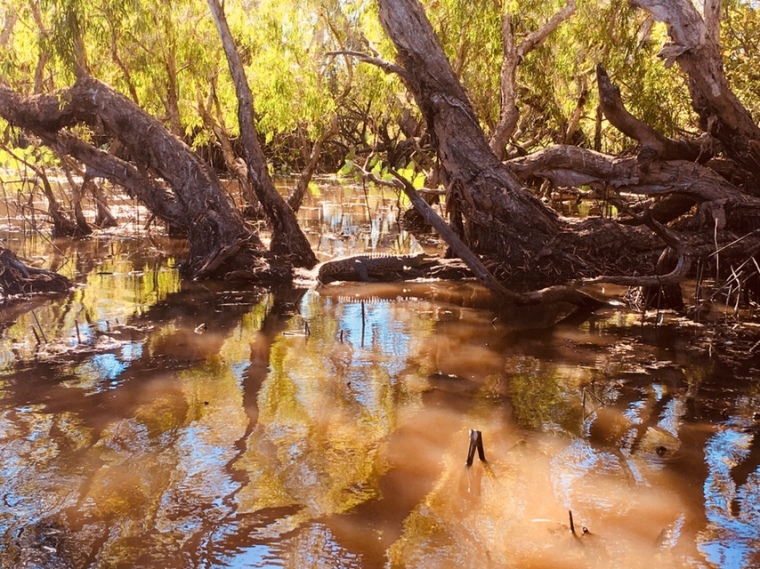 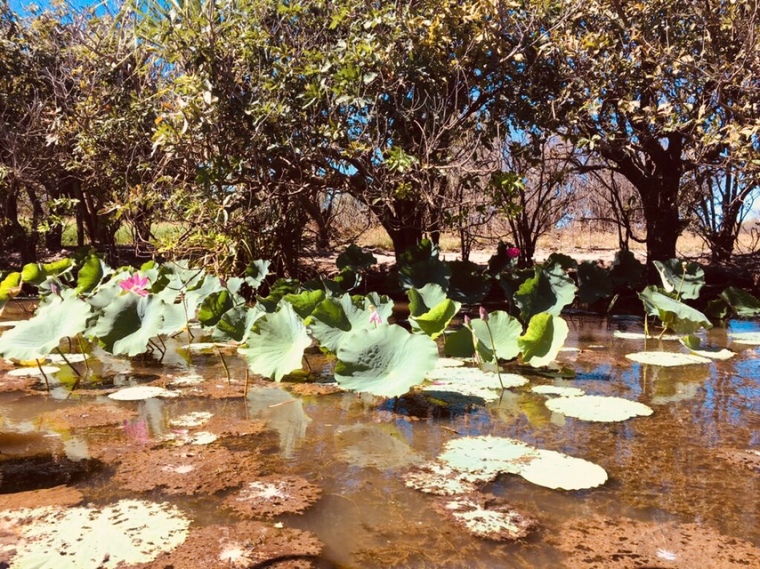 On our second day we drove along a very bumpy dirt track from our campsite to Jim Jim Falls.

It was a short hike to get to the falls and we had to go past a lake which we weren’t allowed to swim in as it is home to a couple of salt water crocodiles.

After hiking further past that lake we arrived at the beautiful Jim Jim Falls.

There were two fresh water pools, one with a white sand edge and the other you had to climb over rocks to get to.

The second pool was spectacular; it was a deep pool which the waterfall cascaded into. It was a perfect circle with the rock cliff forming a semi circle around the pool. Most definitely one of the most beautiful things we’ve seen since our travels – and it was quiet too, just our group with the whole of Jim Jim Falls to ourselves!

We headed to our second campsite; Mt Bundy Station. We stayed in tents again and there were lots of animals around the grounds. There were cows, horses, a bull, dogs, a little Shetland pony wandering freely and heaps of wallabies bouncing around too.

There was also a river near our campsite, and guess what? There was a salt water crocodile in there! *shock*

We were talking to Simon who said the croc has eaten 2 of the campsite owners dogs!!

He said the owner has been offered a lot of money for the crocodile (for the meat or skin I guess?) but has turned down his offers as ‘the crocs not done me any harm’

…You mean accept eat two of your bloody dogs?!

After hearing that story the boys were winding me up saying the Shetland pony is next – little shits! 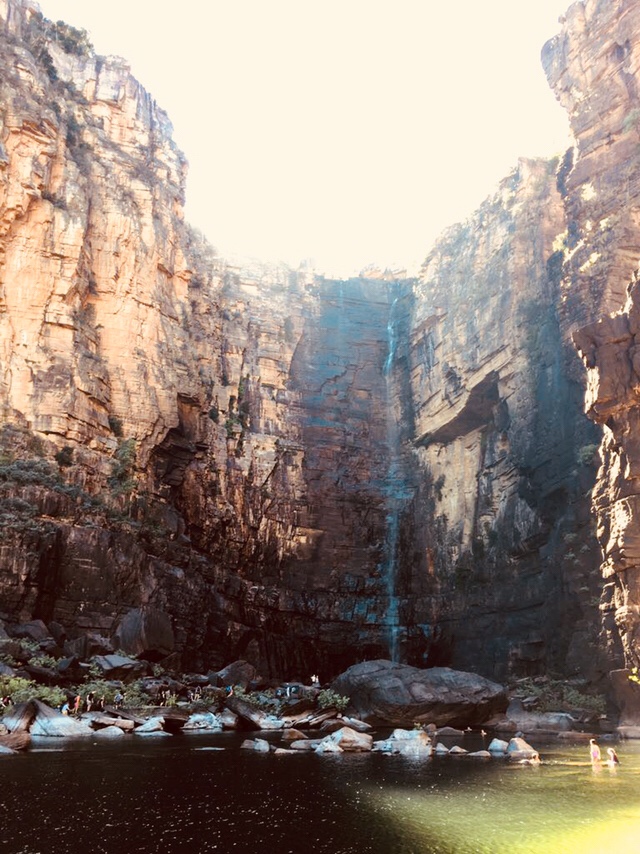 Our last day was spent in the Litchfield National Park. We drove to check out some really old termite mounds – how exciting does that sound?! So. Much. Fun.

In case you don’t do sarcasm the mounds were pretty underwhelming, in my opinion; I’m just not interested in that kind of thing. We were given a fact about termites though: that in each termite mound there is one queen and her ‘soldiers’ and when she dies so do her army and the termite mound starts to crumble away. And that if the queen gives birth to a female, that female will fly away, stop somewhere and build her own army wherever she stops – you go girls!

After all that excitement (sarcasm, again) we went chasing waterfalls. We went to Florence Falls, Buleys Rock Hole then onto Wangi Falls before making our journey back to Darwin.

In Wangi Falls we also bumped into our friends Emma and Tom who had hired a camper-van to travel the Northern Territory. Considering how huge Australia is, it always baffles me when we bump into people we know. Like when we checked into our hostel the first night in Darwin we bumped into Beth, a girl we worked with months ago in Sydney, she was staying in the same hostel!

Once back in Darwin we just spent the evening having a couple drinks with some of the people from the tour and getting ourselves ready for a long ass bus ride from Darwin to our next stop – Alice Springs!

P.s – I also held a snake at one of the pit stops along the way! 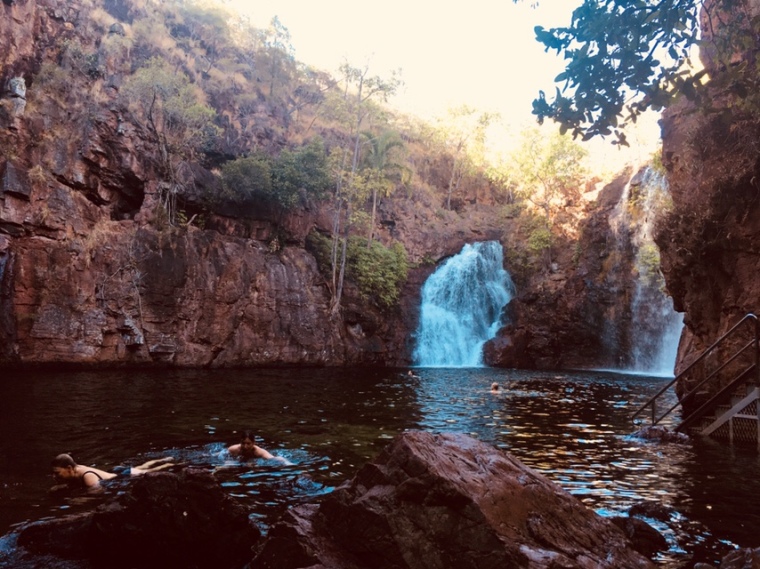 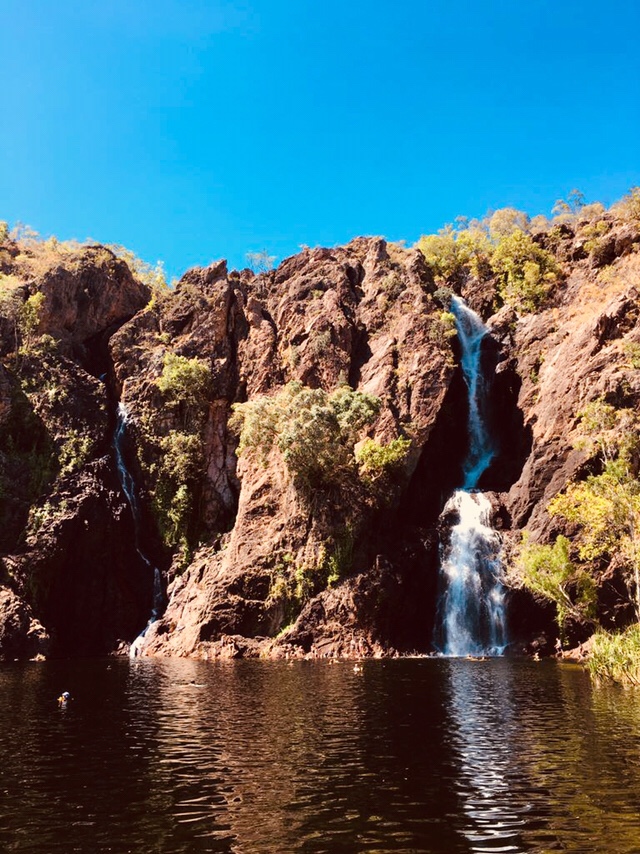 2 thoughts on “My Travel Diary: Darwin”